The very short version of this review is four words long.  Don’t play this game.  The rest of it is just me being bitchy because nobody told me that in the first place, and now I’m grumpy.

Meltdown would be a very apt, if ironic title, if only Glacier 3 were able to even fail spectacularly.  But it doesn’t.  It’s not even unusually bad – just thoroughly so.  There’s very little at all that’s remarkable about this game.

I’ll be honest; I haven’t played either of the previous Glacier games.  I’m going to hedge my bets and assume that they’re not spectacular, sorely overlooked gems of the genre.  Actually, the fact that there are three games in this series makes me wonder which is more patently ridiculous: the idea of death-racing sports cars on huge patches of ice, or the notion that two games with that absurd premise just wasn’t enough.  The lack of polish or finesse in Glacier 3 makes me kind of suspect that the main reason for the setting was that big flat sheets of ice don’t require too many artists to paint textures for, nor level designers to construct.  There isn’t much about G3 that doesn’t suggest – in the way that the National Sex Offender Registry suggests certain people might not make good babysitters – it was done on the cheap and in a hurry. 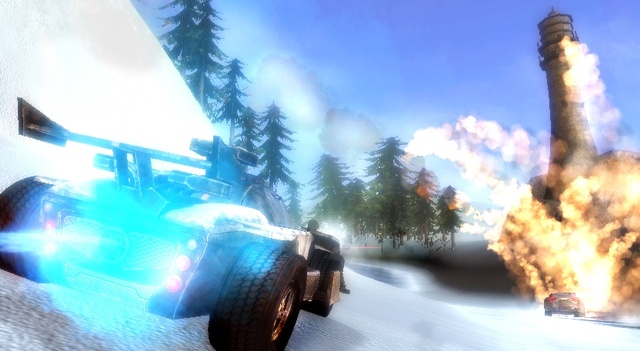 The underlying concept is that you, the “player,” compete in the “illegal glacier races.”  One assumes they’re illegal not because of the weaponry or failure to respect speed limits, but because marketing this as a “game,” and not an electronic regimen of self-flagellation, is a violation of statues prohibiting false advertising.  There’s almost nothing I can tell you about the gameplay that you wouldn’t guess from looking at the box.  You pick your cars, you drive them, you shoot at other players, you throw down the controller in disgust.  Very quickly, in that order.

The vehicle design is a bit like what you’d get if you let a ten-year old glue bits of metal piping to his Matchbox collection.  The roadster inventory mostly consists of chunky versions of sports cars adorned with guns and random metal chunks (for extra danger).  There’s a wide selection to choose from, but in the final analysis, it doesn’t make much difference.  You’ll probably spend more time setting up the game and choosing your ride than you will actually playing it.  If you don’t, you might want to consider scheduling yourself for a CAT scan.  Studies have shown that people who enjoy the repetitive lack of enjoyable anything in Glacier 3 may suffer from a rare but serious disorder, known to the medical community as cerebrum absentesis (missing brain syndrome).

Looking back over this review, I can’t decide whether I’ve been too harsh, or not nearly harsh enough.  I mean, let’s be realistic.  There are lots of things that are worse than playing Glacier 3.  I started to make a list, which began with “waterboarding in syrup of ipecac,” but then I crossed it off because that’s not true, and then I got stuck.  In the end, I think there are just too many good games to keep the (amazon.com pretend) shelves crowded with poop.  This is natural selection at work.  Sorry, Team 6.  Your game line is genetically inferior, and must not be allowed to continue reproducing.  Does that make me the video game Hitler?  Maybe it does.  I challenge you to make a supremely excellent title as payback (the video game Red Army), and crush me under the caterpillar treads of your revenge, so that the Americans can take all the credit.  Until then, vorwarts.

If you come across this game at a yard sale, it might be amusing to pick it up for, you know, less than fifty cents that you borrowed from your mom.  Anyone with pretenses towards game design could well use it as an example of how to make a game that’s not any fun, and then in the future, avoid doing anything Team 6 has done here.  It’s also an excellent gift for anyone you really, really don’t like.  Although, logic dictates that, in such a scenario, you would need to obtain the game first, and that would break the first corollary to the rule we established at the beginning: Don’t ever buy this game.  I would certainly never advocate that anyone reading this article commit a crime, under any circumstances, but in that case you should probably just steal it.