It could be said that the goal of Disney’s Epic Mickey was to paint our favorite mouse in a different light, a more heroic light, if you will.  Over the last couple of decades, Mickey Mouse has become more of a symbol for Disney at large, and hasn’t been featured in many movies or games, obviously, this title was meant to challenge that assumption.

Featuring glossy, colorful animation-like graphics and other familiar Disney elements, Epic Mickey is a platformer that borrows heavily from others in the genre, yet somehow manages to be somewhat original and highly entertaining.  Epic Mickey makes use of both an exciting and gripping storyline as well as visually compelling designs in order to fully engage the gamer in a virtual playground of possibilities.  One of the more interesting aspects of this game is the ability to erase certain sections of an area, which can lead you to hidden areas; exploration in this game is very rewarding to say the least. 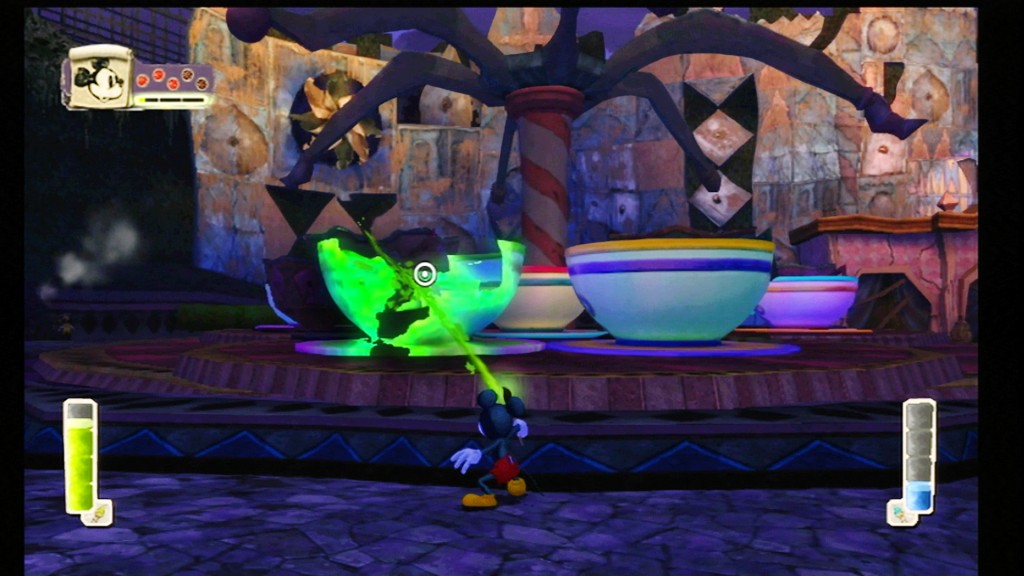 As to be expected, Mickey is characteristically very curious, and gets himself into trouble.   The story hinges around this area called “wasteland” which our hero was previously unaware of.  Mickey unintentionally wreaks havoc in this new world and sets out to rectify his wrongdoings.  This title is very dark, even when compared with the exploits of modern Disney characters and outings.  During his travels in the wasteland, Mickey will encounter many abandoned characters from older Disney productions and be forced to bear witness to their downtrodden predicaments.  Epic Mickey also incorporates a number of pre-rendered cut scenes which hearken back to the golden days of animation; truly a treat for older individuals, while visually compelling enough to impress young gamers as well.

Disney Epic Mickey is a fun game with great visuals that can easily be completed in around 12-15 hours.  This engaging title is perfect for fans of the Disney franchise and/or Wii gamers that are on the lookout for a lighthearted platformer.